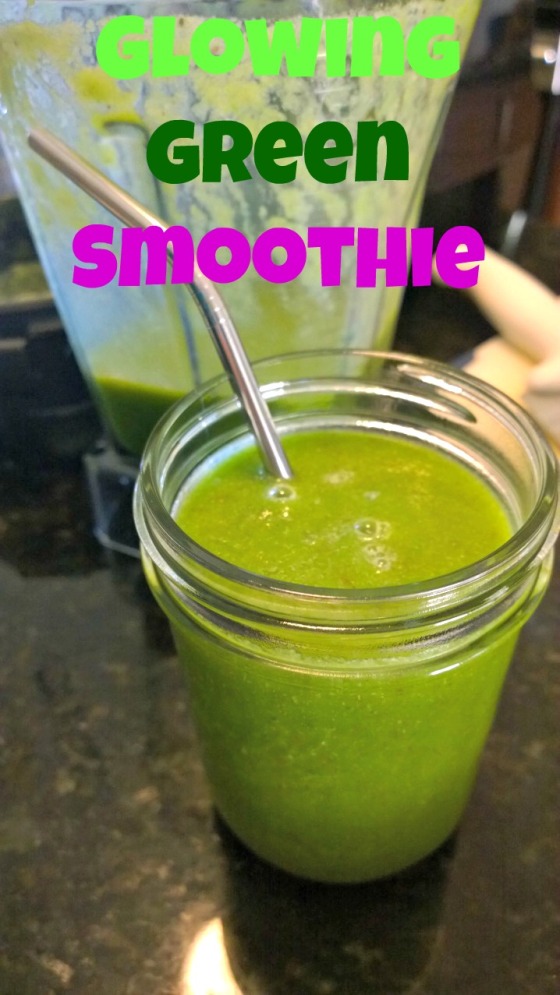 The easiest way for me to make sure I’m getting more fruits and veggies into my diet is blending lots of them all together. This blend seems popular among the green smoothie believers; and it does taste better than it looks thanks to the banana and all the other fruit. You can add some coconut oil to the mix or chia seeds if you’d like. I keep mine pretty simple 🙂 Thanks for reading, enjoy! 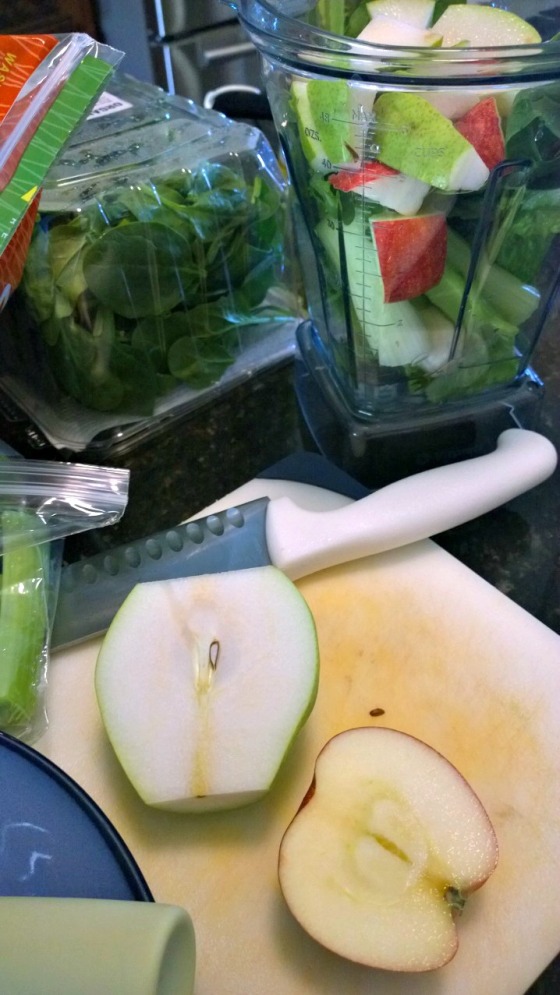 Liquids first, followed by the softest/lighter produce and top with ice. Blend until it’s perfectly smooth – about 30 seconds. 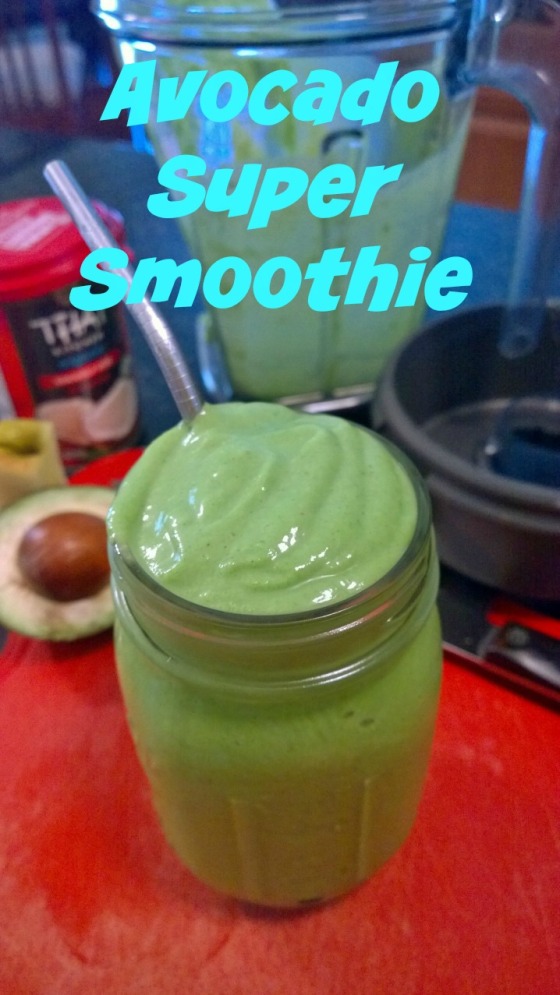 This is amazing! It’s thick and creamy without the dairy and even my kids couldn’t detect the “green” in this smoothie. Thanks for reading, enjoy! 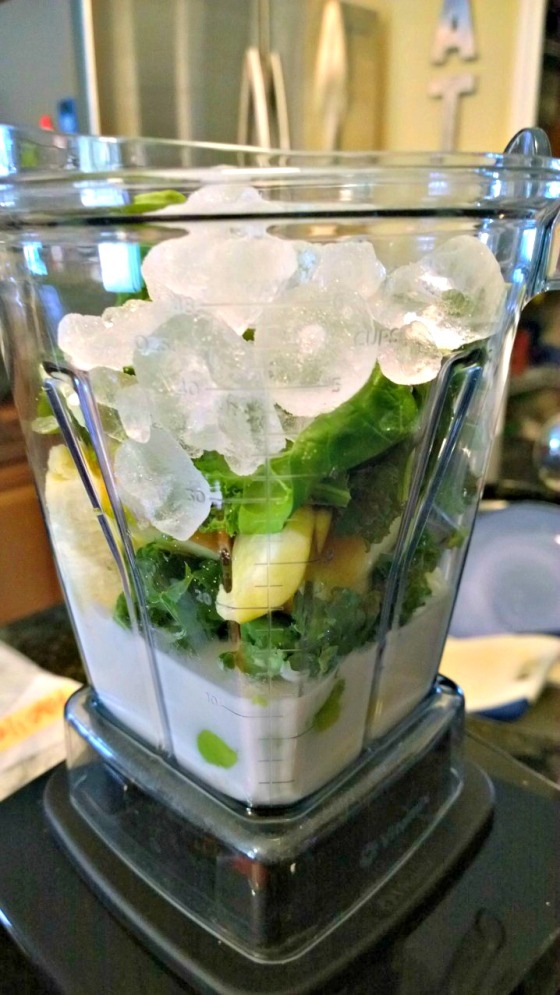 Place all your ingredients in a blender carafe – starting with the liquid and topping off with the heavier items. Process for about 30 seconds until well blended. Pour into a tall glass and enjoy! 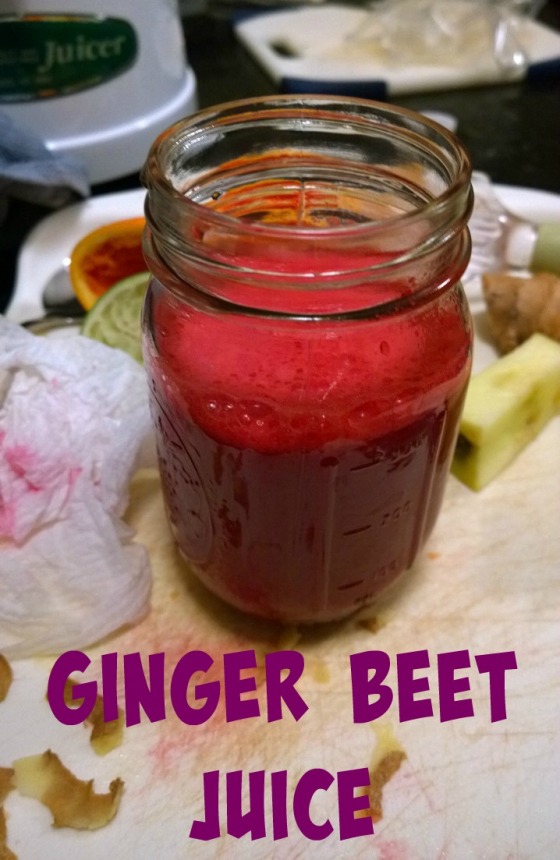 I bought a juicer! I wasn’t sure how this would turn out because I haven’t tried beets since I was a kid…and those were the gross canned kind that you find in salad bars. The finished juice was the most gorgeous magenta color, and I hoped that it would taste as good as it looked! The first taste of anything new is usually off-putting, but as I continued to sip it, it tasted better and better. It’s not my new favorite, but I know I will make it again. The other recipe is a great starter juice, especially for kids. My daughter enjoyed this one, but I didn’t add the ginger because she wouldn’t have appreciated the spiciness of it. Thanks for reading, enjoy! 🙂 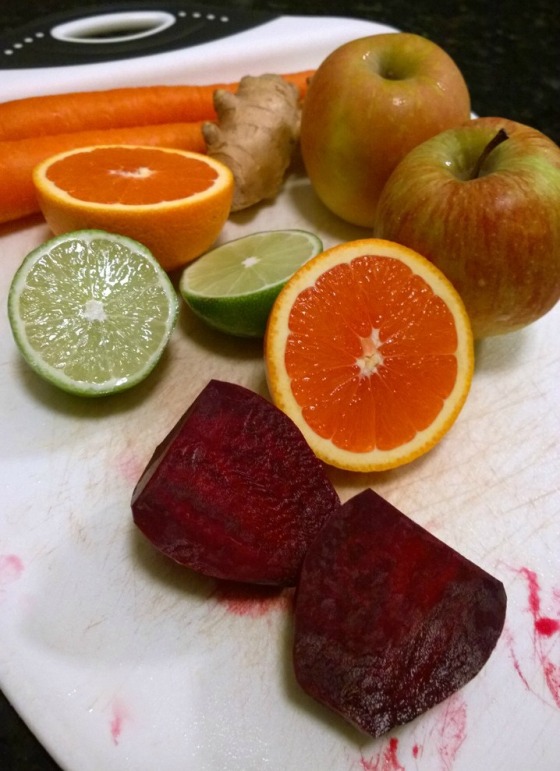 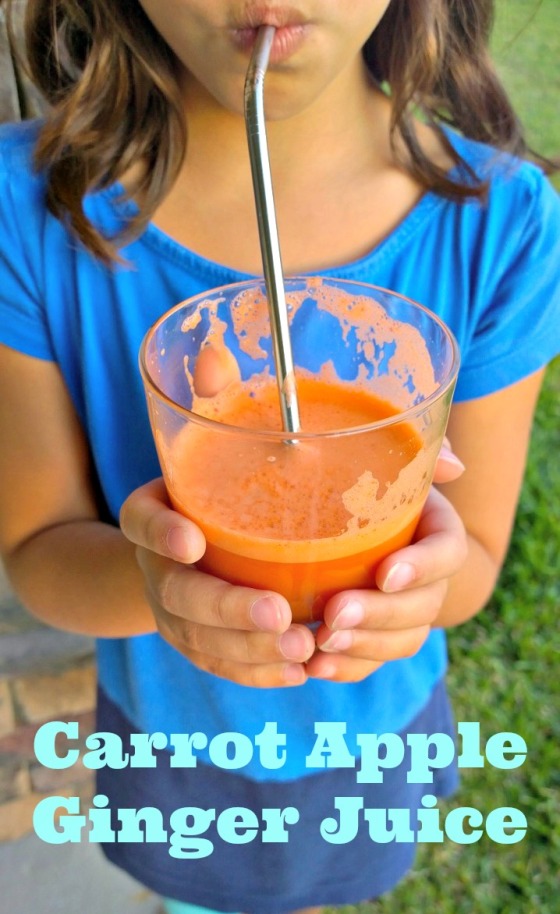 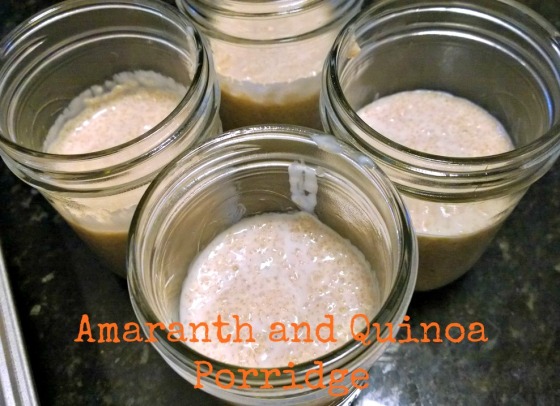 Wow – this is so creamy and surprisingly tasty! I used full fat coconut milk instead of the recommended almond milk. Thanks for reading, enjoy!

Combine water, salt, and grains in a medium pot and bring to a boil. Lower the heat to a simmer, cover the pot, leaving the lid slightly ajar to let air escape, and cook for 25-30 minutes, or until water is absorbed and grains are tender. At this point, you can use the grains in any way you’d like, or move straight into the porridge.

To make the porridge, combine the milk and sweetener in a medium pot and add the cooked grains. Simmer over low heat for a few minutes, or until most of the milk is absorbed a bit.

Divide the porridge into four bowls or glass jars. Top with fruit, nuts or anything else you like! 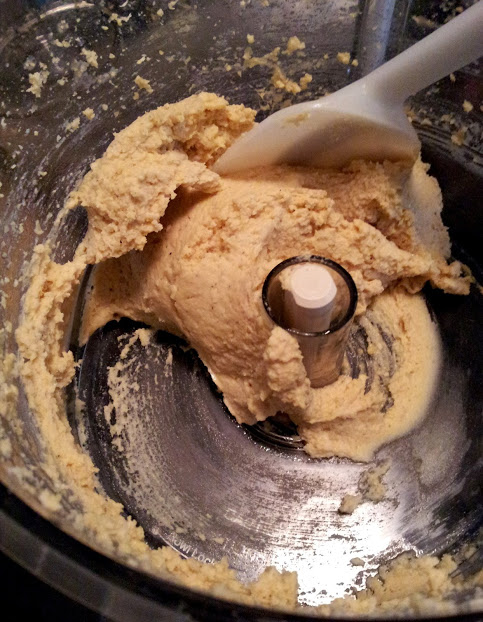 This was really easy to make and I enjoyed eating it with lots of raw carrots. Now if I can only get my kids to try it, that would be great! Thanks for reading, enjoy 🙂

Hummus – adapted from The Kitchn

A food processor or blender

Combine all ingredients. Blend until smooth. If it is a little dry, just add a little more lemon juice or olive oil, a teaspoon at a time, until you have the desired consistency. Add more salt and pepper if you like. Scrape out the hummus in a serving bowl and sprinkle the sumac on top. Serve with raw veggies, or spread on some pita bread. 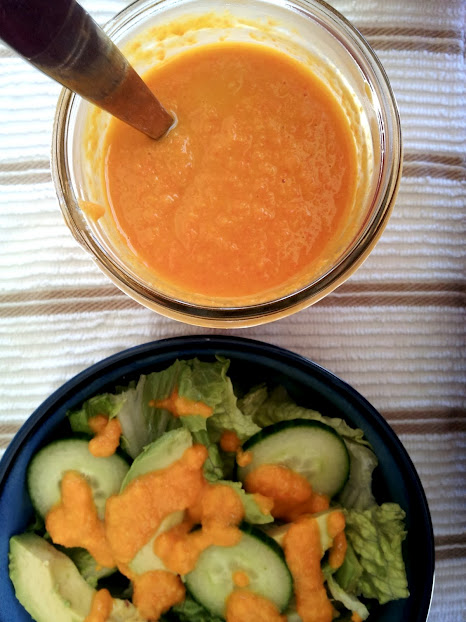 Quick Post: One of my favorite things to order at local Japanese restaurants is the side salad with carrot ginger dressing. I don’t know why it’s so good, I just accept it! Now that I have a recipe for it that tastes so good, I can enjoy it in the comfort of my own home and I can make it cheap! Really, the most expensive ingredient was the miso paste. Now that I have a huge container of it, there is plenty to go around for lots more of this; and my next experiment – miso soup! I doubled the recipe and I’m glad I did. Between the three of us, half the jar was put away 🙂 Thanks for reading, enjoy! 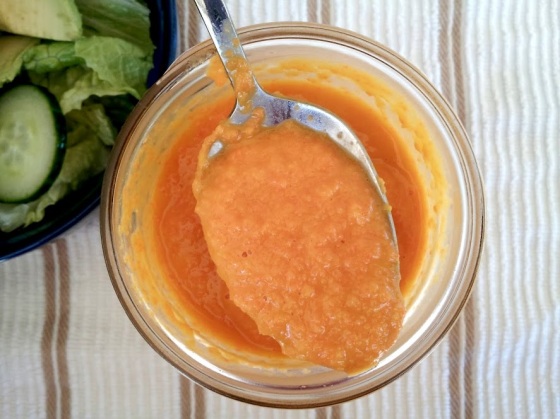 Blitz the carrots, shallot and ginger in a blender or food processor until finely chopped. Scrape down the sides, then add the miso, vinegar and sesame oil. While the machine running, slowly drizzle in the grapeseed oil and the water.

Divide the lettuce among four bowls, add some of the onion and a quarter of the avocado. Drizzle with plenty of dressing and serve. 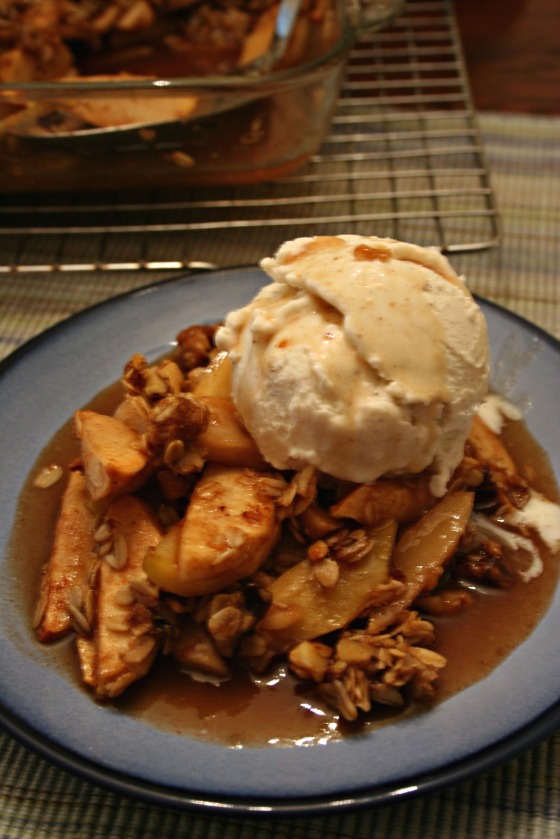 I haven’t made an apple crisp since last year, so I decided it was time 🙂 This smells amazing while baking. My hands smelled like lemon, apple, cinnamon and nutmeg for quite sometime after making this, too 🙂 I love Fall flavors and this is a perfect example of them. I used coconut oil for this instead of canola and we didn’t miss the butter. It’s not a thick crumb topping like the typical crisp with flour and butter; but it was flavorful, slightly sweet and delightfully crunchy. We enjoyed the walnuts in this, too – and the vanilla ice cream brought it all together nicely. Thanks for reading, enjoy! 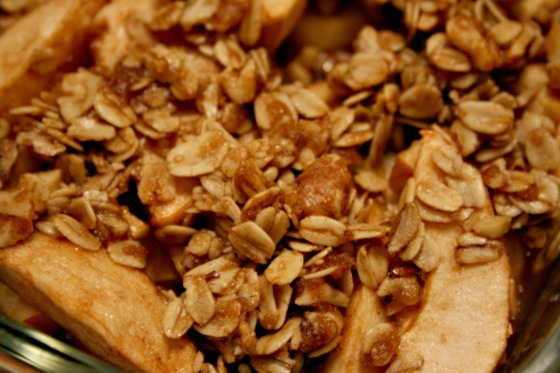 Vegan Apple Crisp – adapted from What Would Cathy Eat?

Mix the apples with the next seven ingredients (through lemon juice). In a separate bowl, mix the oats, flour, brown sugar walnuts, baking powder, cinnamon and salt. Drizzle the organic canola oil over the dry mixture and combine with your fingers until crumbly. Add the water and stir briefly with a fork. Put the apple mixture in an 8×8” baking dish, then sprinkle on the crumbly topping. Bake for 40 minutes, or until the top is golden and the apples are tender. 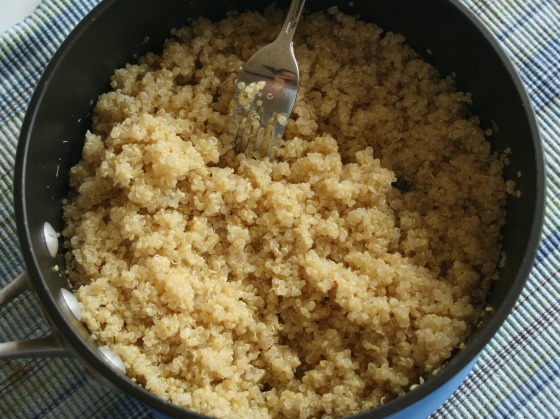 I picked up some quinoa from my local health food store the other day – it’s so much cheaper buying from the bulk bins. I have used quinoa once before to make a quinoa pudding – kind of like rice pudding, only slightly healthier. I remember that tasted great, so I’ll have to find another recipe to share with you – preferably a vegan version.

Quinoa takes a few more steps to prepare than a box will tell you, and since mine didn’t come in a box I used this website for basic cooking instructions. All these steps listed are necessary to ensure mush-free, perfectly cooked quinoa. The only change I made was adding a pinch of kosher salt to the water. Rather than copy all her listed instructions down, here’s the link that’s full of helpful tips and nutrition information on this “super grain”.

The first picture is the product of all those steps – it really was perfectly fluffy 🙂 I used a cup of the cooked quinoa to make this quinoa breakfast bowl. It was tasty and super filling with out the bloat. I was satisfied for hours after eating this. Thanks for reading, enjoy! 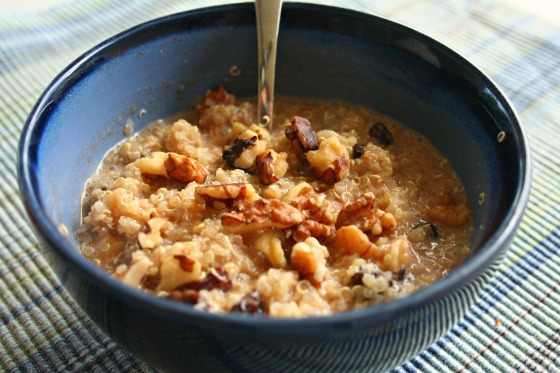 1. Spoon your cooked quinoa in a bowl, top with your desired amount of milk and microwave for 1 to 2 minutes to heat through. Add your desired toppings and enjoy! 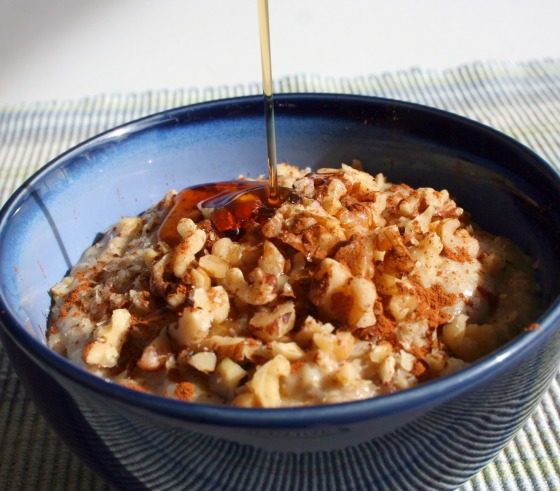 Quick Post: This breakfast requires a little more time than the average, so it’s perfect for the weekend. Mine took at least 15 minutes for the liquid to absorb. My husband commented: “It looks like you’re killing your oatmeal”, to which I replied “I’m supposed to.” There is no oat texture left in this when it’s done and the bananas get all mushy, so if you have texture issues – fear not! The addition of walnuts helps cut the near slimy-ness of this oatmeal. After I took the pictures, I thought to add raisins which also helped add textural interest and a little sweetness. I can tell you that this is filling, but I’m not full – to me there is nothing worse than feeling full and bloated; especially in the morning when there is things that need to be done. 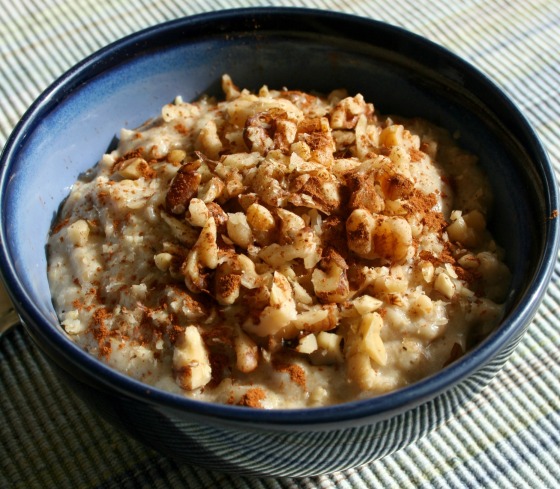 In a small pot, over medium heat, whisk the oats, cinnamon, sliced banana, water + almond milk together. Bring to a boil and reduce heat to a low boil. Stir a few times while cooking, until almond all the liquid is absorbed – about 6 to 10 minutes. Stir in flax meal and continue cooking for 1 minute. Temper your egg – In a small bowl, whisk your egg quickly and add about 1/3 cup of the hot oatmeal mixture slowly; being careful to avoid scrambling the egg. Slowly add the egg/oatmeal back into the pot and stir until thoroughly combined. Let cook, without stirring, for 2 more minutes then pour into a bowl and top with nuts and maple syrup. Enjoy! 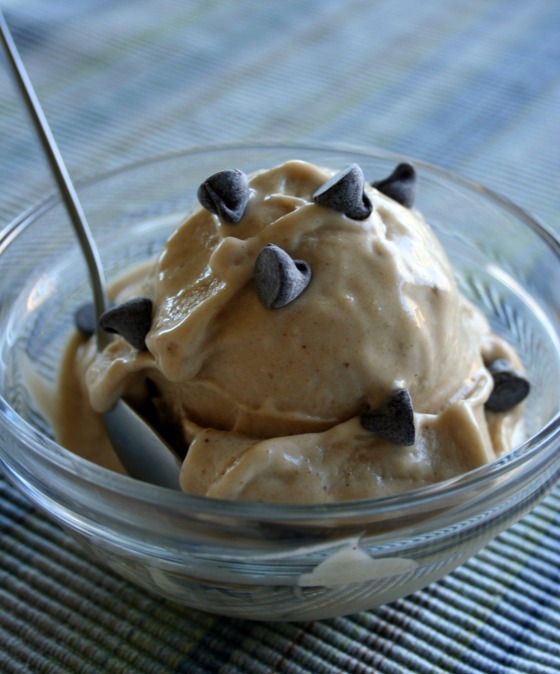 I am so surprised at how good this is and my kids loved it – even my husband thought it tasted good. It’s not too banana-y or peanut buttery. The texture is smooth and creamy, like a nice custard style ice cream. This was a good fake out dessert because ice cream is my absolute favorite  – I miss it! It’s been about four weeks since I have had any “real” dessert, but I was pleasantly satisfied with this treat. I added the chocolate chips mostly for visual interest, I gave the chocolate chips to my kids because the soft serve didn’t need anything. My son wants me to make this again soon – score 2 for mom! Thanks for reading, enjoy!

Directions:
1. I used my food processor for this, but you could use a blender to make it too. Place all the banana in the work bowl and pulse until nice and smooth. It took a little while at first, but once the peanut butter was added it