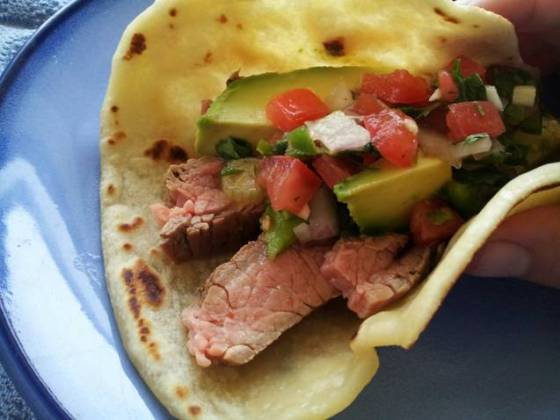 There is a lot going on here, but all of it was pretty tasty. Rather than post the full recipe for the flour tortillas, here is the link. I had some issues while making them! They’re not difficult to make, but when I thought of separating them with pieces of waxed paper (to save on counter space), that’s when it all fell apart. The dough stuck to the paper so badly! Most of the tortilla rounds became mangled while I tried to remove them from the paper – I was so bummed! I did take some of the scraps and rolled them out again, which is a little more difficult the second time around. The surviving tortillas turned out pretty well, but they’re nothing like the best tortillas I have ever had! Those are found in San Diego, California at Old Town Mexican Cafe! I could go for some of that now 😉 Thanks for reading, enjoy!
Cilantro Lime Marinade & Flank Steak Tacos – adapted from Simply Scratch
1. Place the steak in a zip top bag, set aside. Combine all ingredients and blend well with a stick blender, or mini food processor. Pour marinade over the steak, place it in the fridge to marinade for several hours.
2. Heat up some warm soft flour tortillas, layer with thinly sliced strips of the Cilantro-Lime Steak, shredded iceberg lettuce, Salsa Fresca and top with shredded Monterey Jack cheese.

Salsa Fresca – adapted from Simply Scratch
Directions:
Combine all ingredients into a large bowl. Toss until all ingredients are mixed. Cover with plastic wrap and refrigerate for at least 30 minutes. Serve with tortilla chips or on top of your favorite tacos.