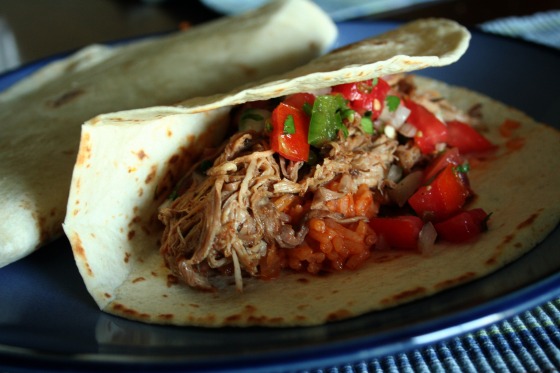 This pork couldn’t be easier to prepare and it’s so flavorful. I love crock pots for this reason – set it and forget it. I haven’t made this recipe in at least a year and a half, but pork shoulder was only $1.77  a pound at Downtown Produce – dirt cheap! I love a good deal 🙂
I seasoned this the night before, wrapped it in plastic wrap and let it chill out overnight. I started it pretty early in the morning so it could cook for at least 8 hours, and shredded it with two forks once it was done. After cooking, I took out about 2 cups of the liquid just to make serving this less messy.
Verdict: So good – tender and flavorful. I served this with my taco/burrito go to “orange” rice and fresh pico de gallo. The leftovers will be even better and this makes a ton. Thanks for reading, enjoy! 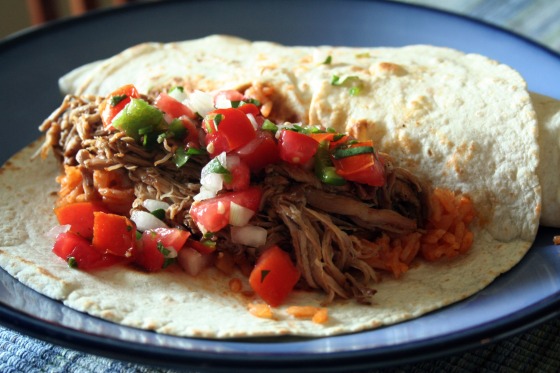 Pulled Pork Tacos – adapted from feasting.in
Directions –
1. Prep the night before – Mix up the seasoning well and liberally coat your pork roast, wrap in plastic and store in the fridge.
2. Place the roast and enough water to come up half the side of the meat. Cover and cook on low for 8 to 10 hours. Shred with two forks and enjoy with your favorite taco or burrito fixin’s. 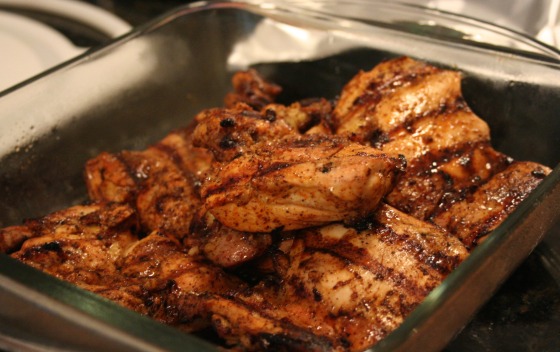 This is so good, super simple but oh, so flavorful. While looking through Publix’s online ad, I discovered that boneless, skinless thighs were on sale this week and immediately I thought of this recipe. It’s marinated in some of my favorite flavors – lime, cumin and chili powder. 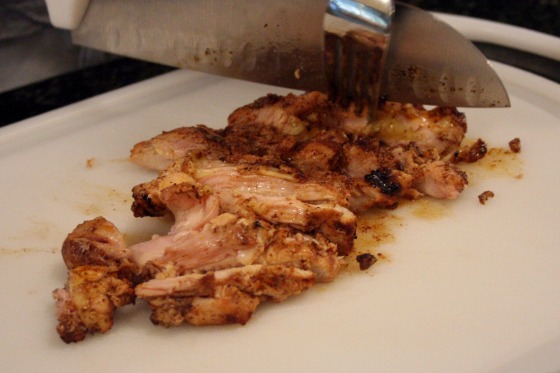 I’m serving these grilled with tortillas, this salsa (I was craving it) and my “orange” rice. I’m pretty plain when it comes to taco night because there is always rice, cheese and pico de gallo, or in this case salsa. My family is (thankfully) easy to please most times:) Thanks for reading, enjoy! 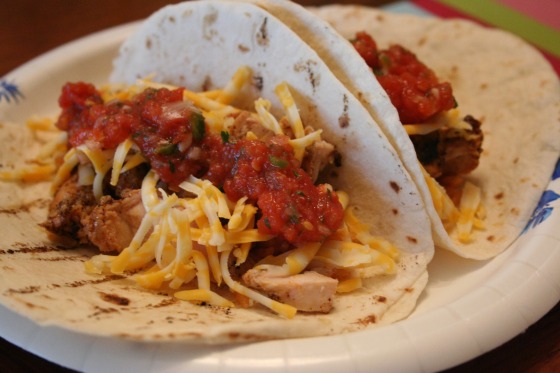 1. Combine all ingredients minus the chicken. Place the chicken in a gallon size Ziploc bag and pour the marinade over top. Mush the bag to coat all the chicken well. Place the plastic bag in another container to protect the rest of the fridge in case the bag leaks. Marinade for 4 but no longer than 8 hours.

2. Preheat outdoor grill and cook the chicken pieces for 7 minutes a side. Take off grill, cover with foil and let rest for about 5 minutes. Enjoy! 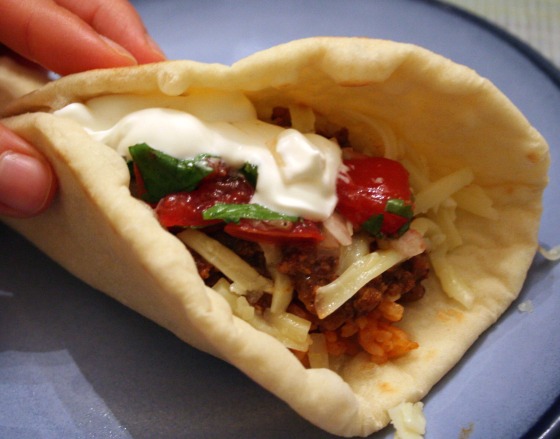 Note to self: take it easy on the salt next time. I followed the directions/amounts and this came out too salty for me. The ground beef mixture by itself is really flavorful and a tad on the spicy side, but when it’s combined with the rice, cheese, pico and some sour cream its much milder. I don’t usually advocate the use of sour cream in Tex-Mex dishes, but this time it was needed to cool things down a bit.

Tonight was my first try at making tortillas – the recipe isn’t authentic because there isn’t a drop of lard in the mix. I have nothing against the use of it, but I didn’t want to try that kind of recipe, fall hopelessly in love and be required to make them for the rest of my life!;o) As a kid, my parents would take us to Old Town San Diego to eat at this amazing Mexican restaurant. I enjoyed watching the ladies make tortillas through the big windows in the front of the restaurant. For some reason I was entertained by that; but more so I knew that some of those freshly made, authentic tortillas would soon be in my belly! They were so good!

Overall these were pretty good. If I make these again, I will cut the amount of salt in half and season to taste toward the end of cooking. The tortillas were good, especially for a first try but I am open to finding a new recipe for my next attempt. Thanks for reading, enjoy! 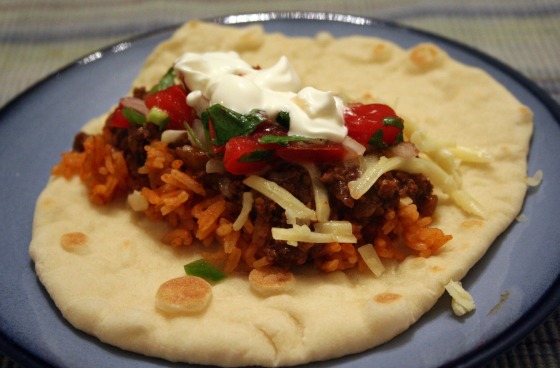 Add 2 tablespoons of oil in a large skillet. Once the oil shimmers, add the onion and cook until softened and lightly browned around the edges, about 3 to 4 minutes. Add the ground meat, 1 teaspoon salt, and garlic. Cook until browned, about 3 to 4 minutes, stirring occasionally, to break up the meat. Add Taco Potion and beef broth. Bring to a simmer and cook, uncovered, until sauce is slightly thickened, 2 to 3 minutes. 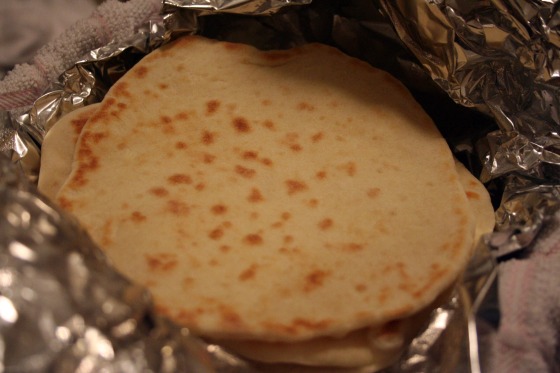 1. Mix together the flour, baking powder, salt and oil. Slowly add the warm milk. Stir until a loose, sticky ball is formed.
Knead for two minutes on a floured surface. Dough should be firm and soft. Place dough in a bowl and cover with a damp cloth or plastic wrap for 20 minutes.
2. After the dough has rested, break off eight sections, roll them into balls in your hands, place on a plate (make sure they aren’t touching) and then cover balls with damp cloth or plastic wrap for 10 minutes. (It’s very important to let the dough rest, otherwise it will be like elastic and won’t roll out to a proper thickness and shape.)
3. After dough has rested, one at a time place a dough ball on a floured surface, pat it out into a four-inch circle, and then roll with a rolling pin from the center until it’s thin and about eight inches in diameter. (If you roll out pie crusts you’ll have no problem with this.) Don’t over work the dough, or it’ll be stiff. Keep rolled-out tortillas covered until ready to cook.
In a dry iron skillet or comal heated on high, cook the tortilla about thirty seconds on each side. It should start to puff a bit when it’s done.
4. Keep cooked tortillas covered wrapped in a napkin until ready to eat. Can be reheated in a dry iron skillet, over your gas-burner flame or in the oven wrapped in foil. While you probably won’t have any leftovers, you can store in the fridge tightly wrapped in foil or plastic for a day or so. Makes eight tortillas.