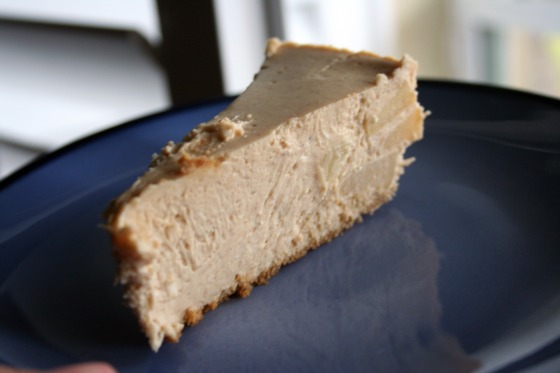 Is this cheesecake ever good! I made it for the first time last year while visiting family in California. My dad requested this cheesecake specifically and I was apprehensive at first because at that time I had only made a cheesecake once. I am usually nervous about cooking for other people, but I wanted to impress him and everyone else who tried it. To my delight, my dad said it was the best cheesecake he ever had and even my Grandma said it was good…huge compliment in my book! Anyway, this cheesecake isn’t exactly a quick dessert and it is really important that you let it sit in the refrigerator overnight for the best flavor…your patience will be rewarded! Note to self – more apples next time. I ended up only using three of the four apples pictured because I thought three looked like enough when they were all cut up. M is requesting some type of chocolate infused cheesecake for Thanksgiving, so if that ends up happening I will be sure to post that one for you all. Also, if any of you out there has a tested cheesecake recipe recommendation, please leave me a comment! It’s always hard to choose new recipes – especially a chocolate cheesecake…there are so many to look through! Thanks for reading, enjoy! 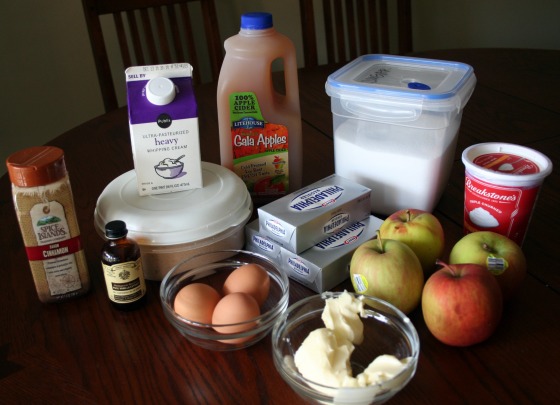 (Everything minus the graham crackers)

To Make the Crust: Butter the bottom and sides of a 10-inch springform pan.

Put the gingersnaps in a food processor and whir until you have crumbs; you should have a scant 2 cups.  (If you are using graham cracker crumbs, just put them in the food processor.)  Pulse in the sugar and cinnamon, if you’re using it, then pour over the melted butter and pulse until the crumbs are moistened.  Turn the crumbs into the springform pan and, using your fingertips, firmly press them evenly over the bottom and up the sides of the pan as far as they’ll  go.  Put the pan in the freezer while you preheat the oven.  (The crust can be covered and frozen for up to 2 months.)

Center a rack in the oven and preheat the oven to 350 degrees F.

Remove the pan from the freezer and wrap the bottom tightly in aluminum foil, going up the sides.  Place the pan on a baking sheet and bake for 10 minutes, or until the crust is set and lightly browned.  Transfer to a rack to cool while you make the apples and the filling.  Leave the oven at 350 degrees F.

To Make the Apples: Melt 2 tablespoons of the butter in a large nonstick skillet over medium-high heat.  When the foam subsides, toss in half of the apple slices and cook, turning once, until they are golden brown, about 3 minutes.  Sprinkle the apples with 1 tablespoon of the sugar and cook them, turning, just until coated, another minute or so.  Scrape the apples onto a plate, wipe out the skillet and repeat with the remaining apples.  Let the apples cool while you make the filling.

Getting Ready to Bake:  Have a roasting pan large enough to hold the springform pan at hand.  Put a kettle of water on to boil.

To Make the Filling: Working with a stand mixer, preferably fitted with a paddle attachment, or with a hand mixer in a large bowl, beat the cream cheese on medium speed, scraping down the bowl often, for about 4 minutes, or until it is velvety smooth.  Add the sugars and beat for another 2 minutes.  Beat in the cider, vanilla, and cinnamon.  Reduce the speed to low and beat in the eggs one by one, beating for 1 minute after each egg goes in.  Finally, beat in the sour cream and heavy cream, beating just until the batter is smooth.

Pour about one-third of the batter into the baked crust. Drain the apples by lifting them off the plate with a slotted spoon or spatula, and spoon them into the pan.  Cover with the remaining batter and, if needed, jiggle the pan to even the top.  Place the springform pan in the roasting pan and pour in enough boiling water to come halfway up the sides of the springform pan.

Bake the cheesecake for 1 hour and 30 to 45 minutes, covering the cake loosely with a foil tent at the 45-minute mark.  The cake will rise evenly and crack around the edges, and it should be fully set except, possibly, in the very center if the center shimmies, that’s just fine.  Gently transfer the cake, still in the pan, to a cooling rack and let it cool to room temperature, then refrigerate it for at least 6 hours; overnight would be better.

Run a blunt knife around the edges of the pan to loosen the crust, open the pan’s latch and release and remove the sides.

Source: Adapted from Baking: From My Home to Yours by Dorie Greenspan, Houghton Mifflin Company, November 2006